Berlin; capital of Germany, city of history, contrasts, war remnants, but also city of Christmas markets and lights all around.

It is definitely not the most beautiful city I have visited, but surely one of the most interesting and appealing ones, especially in December before Christmas.

Obviously there are many popular sights you can visit here, which we did and I will mention briefly. But I especially want to mention a few of the nicer neighborhoods, some ultimate shopping tips from my experience and of course the many Christmas markets in particular!

Berlin is in my opinion the best place to go in December because of the many Christmas markets, the lights and decoration all around and the lovely atmosphere. Be aware that it is generally very cold here this time of year, but the many offerings of Glühwein and hot chocolate will surely keep you warm. 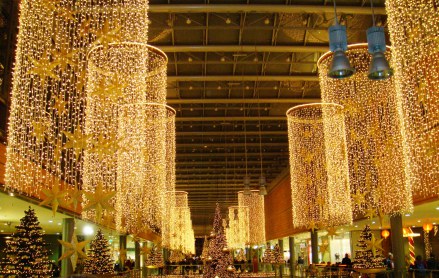 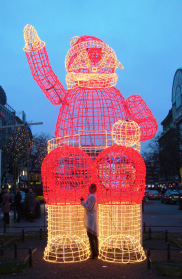 Did you know that there are more than 40 Christmas markets in Berlin in the period end of November until Christmas? You can check all of them here:

The difficult thing however is to choose which ones to visit, as there are so many! Of course you can just stroll round the city and pass by a few like we did, but sometimes it is also practical to know which ones are the nicest in advance. Some of our favourites are:

This is one of the most popular markets in Berlin, situated next to the Französischer Dom, the Konzerthaus and the Deutscher Dom, on a square in the city centre. This stylish Christmas market gets around 60,000 visitors every year from all around the world!

Here you will find glassblowers, candle makers and many jewelers, as well as other craftsmen offering high-quality goods. There are Christmas shows on stage and next to the many market stalls with the traditional food and drinks, Michelin-star chefs offer haute cuisine in heated tents. It also has indoor stalls where you can warm up during your shopping spree.

Christmas market at the Memorial Church on Kurfürstendamm

Next to the Kaiser Wilhelm Memorial Church there are more than 100 stalls which form a traditional Christmas market in the west part of the city near Kurfürstendamm.

In between the festively decorated Breitscheidplatz between Kurfürstendamm and Zoologischer Garten you can buy many Christmas decorations, clothing, accessories, toys, as well as lots of drinks and food. 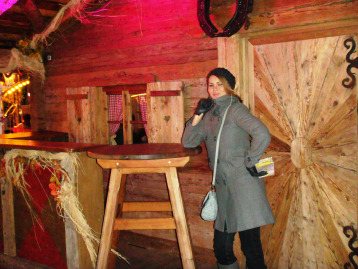 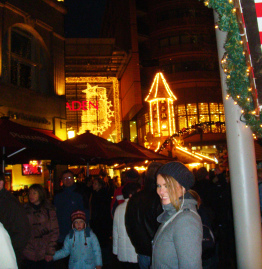 At the Memorial church there are also many stalls with the traditional bratwurst, sweet waffles and seasonal treats, such as the usual hot chocolate, Glühwein and homemade eggnog. Luckily this can be enjoyed in the warmed pavilions with small carousels all around giving the market a nostalgic charm.

With a free ice skating rink, curling track and lights in all the trees of the old Potsdamer street, the Winter World on Potsdamer Platz is an impressive sight. It has a crafts market where you can watch bakers, potters, felters or basket weavers make unique hand-made Christmas gifts. And of course also here again many drinking and eating stalls.

This one is a bit more quiet, less expensive and open every night (except Christmas Eve) until the 28th of December.

With a big ice rink and many stalls in front of the impressive city hall, it makes a nice relaxing visit if you prefer to avoid the crowds.

This market can be found in Mitte near the Berliner Dom, next to a beautiful church with Christmas displays inside and a huge traditional ferris wheel in front of it. 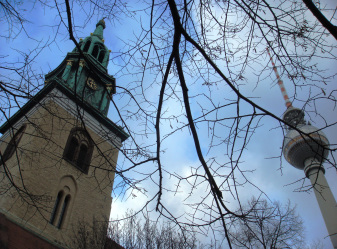 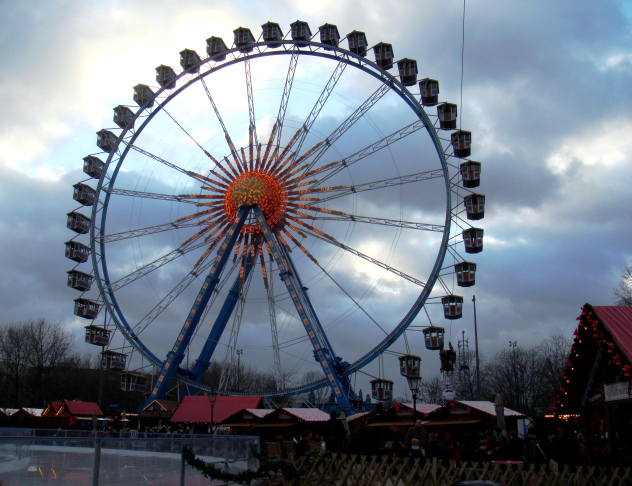 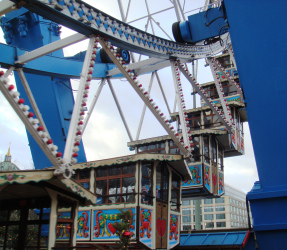 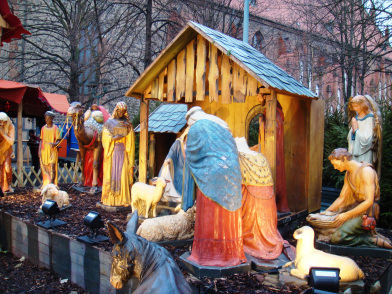 Do take the traditional ride in this one as it gives you a great view right at the TV tower and the Berliner Dom:

A very beautiful sight in front of the Charlottenburg Schloss lit up in full color. Here they have real reindeers, a choir instead of mechanical music and natural decorations instead of plastic ornaments, so what’s not to love?! Especially with a view and surroundings like this:

Best neighborhoods for shopping and eating

Mitte and Kreuzberg are in my opinion the best places to go for boutique, vintage and brand shopping.

In Mitte you will find a mix of the famous brand shops, small cafe’s, vintage shops and the more commercial stores and restaurants. And in Kreuzberg there are some more original boutiques, interior shops, authentic café’s and gift shops with unique and colorful buildings around. 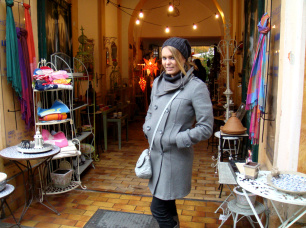 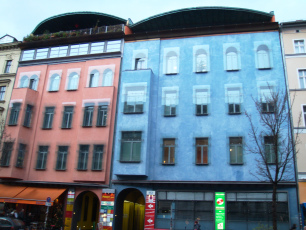 Go to the Torstrasse and Charlottenburg-Savignyplatz for the more original nightlife and restaurant options. But as there is so much to do and see in this vibrant city go to below site for all tips on sightseeing, eating-and nightlife options:

It is located on Tauentzienstrasse near Kurfürstendamm. Such an impressive building and the decoration in the windows and inside the store are so pretty, it just can not be missed! If you are looking for Christmas decorations and inspiration, this is the perfect place, as they have many Christmas color themes displayed in the main entrance hall, which makes the store its own Winter Wonderland. 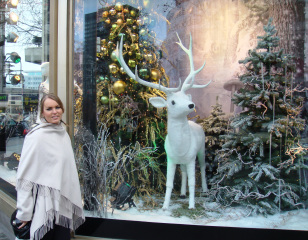 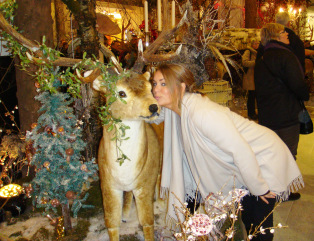 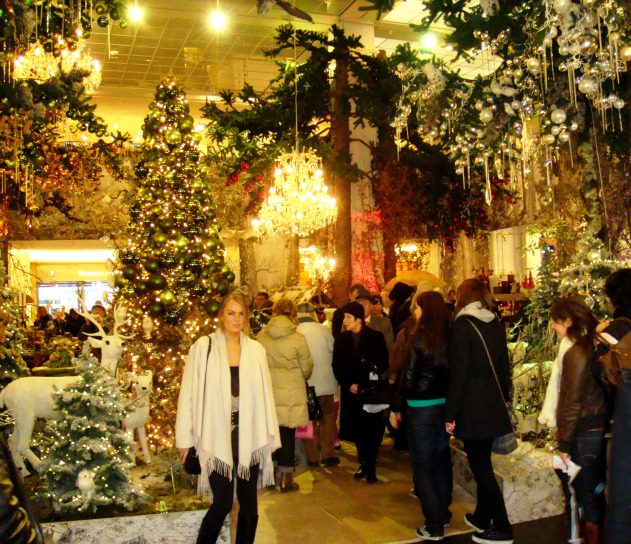 Kurfürstendamm itself is also worth a visit, as it is the main street of Western Berlin with many famous designer boutiques. It is therefore the most famous street of the city, and totally decorated during this season.

This is very special luxury department store in the middle of Berlin on the famous Friedrichstrasse.

This high-end department store has such a unique character and interior that it is a must visit for everyone who adores shopping as well as architecture. If you’re not so much in to shopping, just walk around this department store and admire the architectural features, such as the glass ceilings, beautiful marble stairways and geometrical details all around, as well as the beautiful Christmas decorations.

If you go to Berlin it is inevitable to see some of the city sights and of course the many remnants of the Cold War and World War II.

Find out all about German history through the following must visit sights:

This gate is a symbol of a turbulent European history and now of unity and peace. The beautiful Quadriga (sculpture on top of the gate with goddess Victoria) was taken by Napoleon and brought back luckily at a later term. Unfortunately the gate did not survive WWII, but was restored, as the rest of Berlin.

This impressive building seats the German parliament. It was remodeled in the 1990’s and is a true survivor, as it has survived bombs, fires and revolutions. It is nowadays one of the most iconic buildings in Berlin.

The glass dome on top was added after the city was reunited as a symbol of the New Berlin, and gives great views over the city.

This is also one of the iconic and most impressive buildings of the city and located on Museum island in Mitte. It is the largest church in Berlin and the center for the Protestant church of Germany. It attracts thousands of visitors every year from all over the world and is well worth a visit on both the out-as inside. 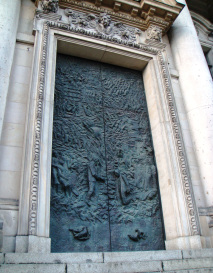 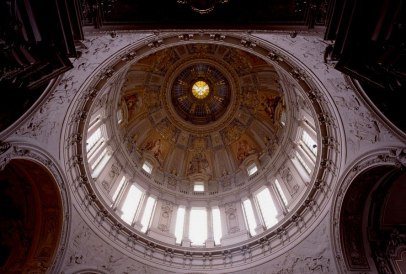 If you want to see the whole of Berlin in just one glance, go to the top of the Berlin TV Tower at Alexanderplatz in Mitte. This spike can be seen towering over the city with its 207 meters high structure. It gives a great view over many main tourist attractions such as the Bundestag, the Brandenburg Gate, the Main Railway Station and Potsdamer Platz among others.

It is open daily from 10 am till midnight, go in the evening for the best sunset views over the city, and you can even have dinner or drinks here at the bar on the observation platform or in the restaurant on the next floor.

With more than 1 million visitors a year, it is one of the most popular tourist attractions in the city. Because of this it is wise to book your tickets for a visit to the top online in advance:

Remnants of World War II and the Cold War can be seen at:

After World War II, during the Cold War the city was divided from 1961 until 1989 by a big and vast stone wall. Find out all about the Wall by visiting the site and its remnants. Such an impressive sight to see the remainders of a wall which has only been taken down little over 25 years ago, after which this city was re-united. 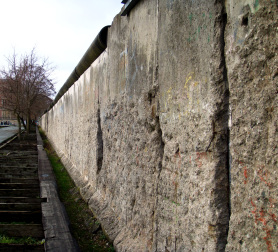 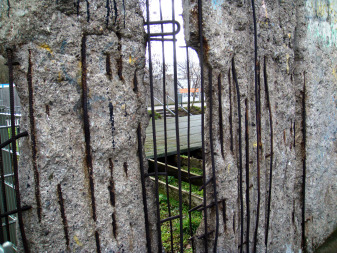 This is the name the Western Allies gave the most well known Berlin wall crossing point from East to West during the Cold War. Checkpoint Charlie can still be seen and visited as a symbol of the Cold war, which represents the separation of East and West Berlin during this period. Actors dressed as allied policemen are standing in front of the guardhouse to have their photo taken with the many tourists coming by every day. 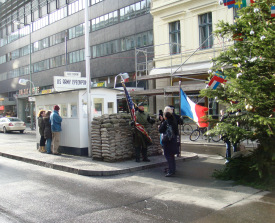 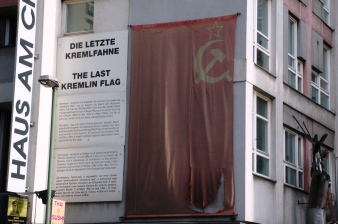 This memorial reminds us of the millions of Jews who were so brutally killed during WWII. Thousands of concrete blocks in different sizes are spread around this field. A very impressive and necessary sight.

If you have an extra day to spare I recommend to wander a bit outside the city and visit the Berlin-Dahlem Botanical Gardens and Botanical Museum. As we love nature and exploring we did a day trip to these impressive green houses and nature surroundings just outside the city.

It is part of the Free University of Berlin and has over 22,000 plant species displayed both out-as inside the glass houses. The total area of glass houses is 6,000 m2 and has several big themed nature parks around it, which are perfect to stroll around and get away from the busy city for a day. 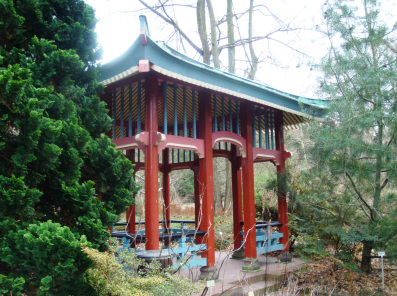 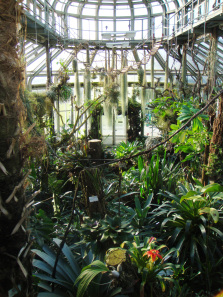